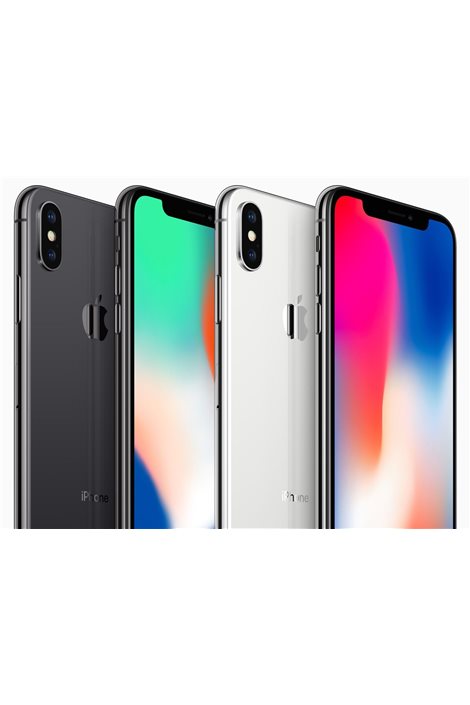 iPhone X at a glance

The iPhone X has a 3D-touch capable 5.8" (diagonal) OLED HDR "Super Retina" display (2436x1125, 458ppi, 1 million:1 contrast ratio) that occupies close to the entire front of the device with the bottom part where the "Home" button once was gone entirely and replaced by a new facial recognition "Face ID" authentication system.

The iPhone X has 3 cameras. On the front, tucked in the rather awkward so called notch, is a new "TrueDepth" camera that in addition to supporting the "Face ID" functionality, shoots 1080p video, takes 7 megapixel photos, and has software support for Portrait lighting, Portrait mode, and more. The two rear cameras, one with wide angle (f/1.8 aperture) and one with telephoto (f/2.4 aperture), both have 12 megapixel sensors, support optical image stabilization, and shoot 4K video and photos. The cameras support motion tracking and offer augmented reality support, as well.

The iPhone X uses a primarily so called "surgical-grade stainless steel" case and has a glass front and back. It is splash, water, and dust-resistant (IP67), but not water-proof, and it has stereo speakers and a Lightning port. It was sold in two color options, silver and a dark "Space Gray".

Apple estimates that the iPhone X provides up to 60 hours of audio playback, 21 hours of talk time, 12 hours of Internet use, and 13 hours of wireless video playback. Because of the device's glass back, the battery can be charged wirelessly using a charging mat that supports the Qi standard.